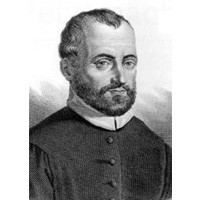 The foundational principles of the Palestrina Choir School are two: 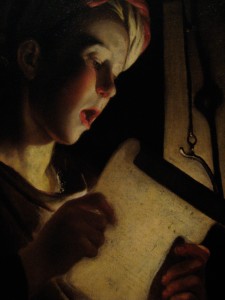 In the natural progression that the mind follows in applying the Liberal Art of Geometry (number in space) to that of Music (number in time) it, perceives an inert beauty. What is perceived as beautiful to the eye is also recognized with joyous spontaneity as sonorous, consonant and admirably awesome to the soul.

Beauty of tone in singing is actualized by purity of vowel and a balanced registration. A pure vowel is defined as: a vowel sung with absence of all undue muscular tensions and lingual dialectical interferences. When the undue tensions are disengaged and local accents neutralized, then a pure and beautiful tone will emerge.

The second foundational principle of the Palestrina Choir School is that of musical literacy. In medieval times the institutional Church was the center and foundation of life, art and culture. It is this foundation that cultivated the organic flow of education and literacy. The literacy was very closely bound to liturgical life which was the center and focus of European Christendom. The seven Liberal Arts were taught as a systematic means of educating the whole person.[1]

The study of music was not only organically connected to the Fine Art of song, but also to the Liberal Arts of Grammar and Music. This union of Grammar, Music and song was to serve the purpose of training choristers for participating in the Sacred Liturgies that society was structured about.

At first the choristers endured long apprenticeships in order to commit to memory the vast repertoire of liturgical chant which could take up to ten or fifteen years. Because, as David Fenwick Wilson verifies in his ‘Music of the Middle Ages:’

“A clerical singer had to have the ability to sing a year’s worth of chant -several thousand melodies and texts-from memory!” [2]

After the invention of the musical staff, by Guido D’Arezzo in the eleventh-century, music education shifted away from the memorization of the melodies by rote and focused on what we would call sight singing.

Although the art of memory had changed  after the invention of the musical staff it was still very necessary.[3] Similar to the acquisition of language skills whereas one cannot read, write, or even form the most rudimentary sentences until a basic vocabulary of words are learned and stored in the sense memory. So too, the musical notation holds no meaning until appropriate tonal, rhythmic, intervallic and note grouping vocabularies are conceptually grasped, learned and stored in the sense memory.

Therefore, this singing at sight has sequential or hierarchical steps that are necessary to make it most effectively learned.

Dr. Edwin Gordon in his ‘Music Learning Theory’ has thoroughly outlined the sequence and process by which this actually takes place. He has coined the term ‘audiation’ to mean the understanding of music without the sounds being actually present:

“Audiation takes place when we hear and comprehend music for which the sound is no longer or may never have been physically present.”[4]

He understood the process by which one learns to comprehend music as the same as how language is learned:

“Although music is not a language, the process is the same for audiating and giving meaning to what was just said by recalling what we have heard on earlier occasions.” [5]

What he is describing is the psychological process by which the ‘agent intellect’[6] pulls or ‘abstracts’[7] the ‘phantasm’[8] from the ‘sense memory.’[9] In this case it is musical phantasms that are stored as universal ideals or concepts and have been formed from a previous perceptions. These musical phantasms are the basis of what Gordon calls the musical vocabularies.

Guido D’Arezzo put it this way in his eleventh-century “Epistle to Michael:”

“but we should commit to deep memory all descents and ascents and diverse properties of individual sounds.”[10]

“If therefore, you wish to commit to memory any pitch or neume, in such a way that it may later come back to you wherever you wish, in any chant which you know or do not know, so that you may be able to sound it immediately and without hesitation, you ought to mark off that pitch or neume at the beginning of some very familiar melody, and to retain any pitch whatsoever in your memory, you ought to have readily at hand a melody of this kind which begins from the same pitch.”[11]

Guido is advocating the same idea of tonal and intervallic vocabularies archived as musical phantasms in the memory and heard or ‘audiated’ internally. One can only learn to sing at sight when the memorial archive is replete with the corresponding vocabularies necessary to recognize in the phantasm the verbal (solfege syllables) or symbolic (musical notation) associations.

So our challenge at the Palestrina Choir School has been to synthesize a pedagogical systematic curricula rooted in the ancient traditions of the past but confirmed by the psychology and research of the present.

We have build an approach that not only makes learning music enjoyable and interactive but also promotes real results when it comes to literacy and understanding.  This is accomplished simultaneously with an intuitive vocal technique that fosters an organic and reflexive vowel purity.  These solid principles we believe were the basis for the almost universal singing technique and musical literacy that flourished in Medieval and Renaissance Europe.

[1]The human species is created as a composite being which has both body and soul. The seven Liberal Arts were divided into the Trivium and Quadrivium as a means to enlighten the soul as to the true nature of, not only himself, but also the world and the things in it.

The Trivium: Grammar, Logic and Rhetoric. They are the arts of the mind or psyche and are pertaining to man’s immaterial nature. They train the mind to conceptualize, think and communicate. In other words: the arts of the soul.

The Quadrivium: Arithmetic, Geometry, Music and Astronomy. These are the arts of matter and apply to the concrete or material aspects of our being. A body has quantity, quality, place, time and the other accidental modes in order to exist and move about in a material world. So the Quadrivium encompasses the arts of matter or the those pertaining to physical bodies.

Therefore, the Seven Liberal Arts are a means to train the whole person: soul and body, abstract and concrete or mind over matter.

[3]“The memorial archive of the medieval musician covered three areas . The first was chant, the second elementary music treatises, and third counterpoint.” With the advent of written music and the staff of Guido D’Arezzo came:”the ability to write something down, to visualize it, [so it] allowed for exact memorization and opened up new ways of committing material to memory.”  Burger, Anna Maria, Medieval Music and the Art of Memory, (Berkly CA, Los Angeles, CA, London, University of California Press, 2005) 45.

[6]“ “Intellect, Agent: an immaterial part of the intellect of man which abstracts the essence of a thing from a given phantasm.” Ripperger, Chadd, Introduction to the Science of Mental Health (Sensus Traditionis Press, 2013) 803.

[7]“Abstraction: the process by which one proceeds from particulars to universals; to separate the part from the whole; an operation performed by the agent intellect in which it draws out the essence or concept latent in the phantasm” Ibid. 800.

[9]“Memory: the interior sense which stores and retrieves sense knowledge or data.” Ibid.